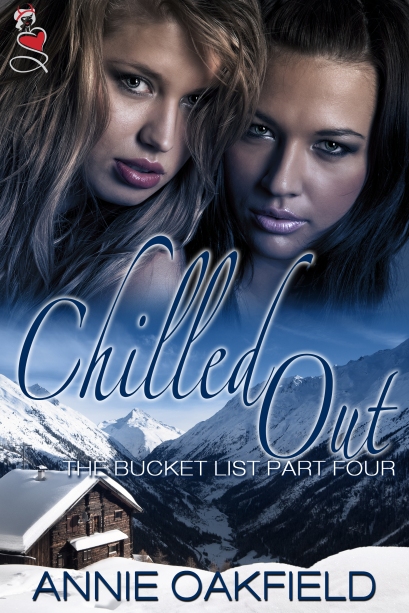 Release day is finally here!  When I offered to write a Christmas version of The Bucket List back in August, December (as it always does) seemed to be an age away. Of course, it’s here with a bang, as are Lucy, Amber and all her friends.

This story contains a small surprise. I could tell you, but I will let my very good friend and fellow author Robert Fanshaw reveal the details on his blog. His first book, ‘Shameless Ambition’ was part of the reason I was able to craft ‘Chilled Out’ in the first place. Thanks Robert!

This story was a hoot to create. Anyone who has read other books in The Bucket List series will recognise some old friends from the first and third stories. Whilst the series doesn’t have to be read in order, it does progress with the numbers and regular readers will notice small changes in the characters’ lifestyle.

I’m also hoping to announce the release of a small Lucy-and-Amber freebie… a prequel to the series. More on that when it’s ready.

In the meantime, stay warm, curl up with a good book (might I recommend one of mine or Robert’s?) and drink hot chocolate with no guilt whatsoever!

After a long delay, I was finally able to sit down with Robert Fanshaw’s novel, ‘Shamless Ambition,’ a book that had lingered on my ‘to read’ list for far too long.

High-flying executive Caroline and barrister Robert have been married for three years, and the demands of work have left little time for their relationship. On a management development course in Spain, Caroline is tempted into indiscretions with some of her colleagues and is drawn into a seedy world of private parties for bankers and politicians; realising too late she has damaged her reputation and her marriage.

I began reading this book with no real idea about where it would lead me.

What seemed like a basic ‘sexual awakening’ story gathered momentum as I turned each (virtual) page until I found myself embroiled in a mild thriller crammed with skullduggery, political manipulation and covert espionage as the various players attempted to use sexual blackmail against each other in order to gain the upper hand.

Can she escape from the web of blackmail that is being spun all around her? As each new day and her blackmailing superiors leave her no choice but to explore her new-found sexuality, can she hang onto her high-flying career, or will she sink without trace into black-listed anonymity as Europe-wide consequences threaten the continent’s financial stability?

And will her husband ever forgive her?

I awarded Shameless Ambition five stars. I eagerly await the release of the sequel.